or send us an email with your enquiry:

What our clients say ...

“Q>TAR has been in place for over twenty five years and has been used as our time recording system for monitoring staff attendance, sickness and holidays. The data captured has been instrumental in ensuring there has been sufficient oversight of the company's staff utilisation across its operation.
During this time, there have been minimal issues with the software in terms of reliability and ease of data access. The hardware, as it has aged, has shown an expected level of reliability, with any fix on fail requirements dealt with efficiently under the annual maintenance agreement.
All in all, the use of Q>TAR has continuously satisfied the needs of the company, and the service provided by P & Q International has been very satisfactory.”
(Tim Sill of Capita plc)

“We employ approximately 1400 employees between two plants in Ireland. We have been using QTAR since 1987 and operate it in both these plants. Our shift patterns are very variable. The staff at P&Q are always very helpful.”
(Catherine Murphy of Cadbury (Ireland))

“We installed QTAR in 1991. It revolutionised our whole system of doing the payroll. QTAR is reliable and flexible and P&Q are always ready to help, they respond very fast.”
(Pat Thomas of Monarch Aircraft Engineering Ltd)

“At the Wolverhampton site, the rules for calculating employees' gross pay are incredibly complicated, depending on a multitude of factors such as the type of work, when they are working compared with their normal shift, the reason for the overtime or shift swap and even how dirty the work is! So QTAR has to be used to calculate the gross pay for each period of work. The supervisors approve and record reasons for overtime, shift swaps and absences during the shift, directly into the system, which has streamlined the process enormously.”
(Audrey Woolvin of Goodyear Dunlop)

“We first installed QTAR in 1991. We have found QTAR extremely flexible - it can do anything you require of it. Day-to-day operations are simple. It rarely goes wrong or gives us trouble. The Support team is well-informed and comprehensive. P & Q have kept their focus squarely on T & A - they simply have to be good at it.”
(Bob Sharratt of Caparo Tubing)

“We've had QTAR installed for quite a few years, and we find it to be a good program. P&Q are very friendly and helpful. If I have a problem or question they are always ready to assist me.”
(Christine Wathan of Crown Cork and Seal)

“We have been using QTAR since 1991. We have a flexitime system with complex flexible working time requirements. It is largely self-administered (within the rules configured into the system) by the 1,500 employees. A competing system was installed and then rejected, since it was unable to cope with our requirements.”
(Julie Coldridge of Abbey Life)

“Our shift patterns are complex – 5-day, 7-day, morning, afternoon, nights and rotating, and we also have people on fixed salaries. QTAR handles these fine. When we upgraded QTAR just before Christmas, that went very smoothly.”
(P. A. Rothwell of TMD Friction)

“We have a workforce of about 850 and have used QTAR since 1992 to keep track of shift work, contractor hours and salaried personnel for payroll. We also rely on QTAR in our costing processes, to authorise overtime, book employee holidays, report excessive unauthorised absences, etc.”
(Martin Buckle of Kraft Suchard)

“We originally purchased QTAR in 1990 purely for payroll management, with up to 3000 individuals on the system. We found that using the system was simple, with a lot of standard reports included. But when we realised how QTAR could be expanded, we had extra ones written for reporting things like absenteeism in different ways that suited our requirements better. P&Q staff give good support and are easy to talk to, even if you aren't very familiar with computers.”
(Stella Pepper of LEONI)

“The QTAR system has been in our factory since 1986 and has been very stable with few issues. P&Q support has been reliable and efficient. The application has outlived a number of HR system transitions, and migration of interfaces has not been problematic. A number of custom modules have been designed to meet our special needs, including absence and overtime reporting.”
(Hans Commandeur at BAT)

“We have been using the QTAR system about 16 years. It works well. It's hard to make set rules about this kind of factory. Work patterns change often. People work very variable hours. Sometimes they make time up when they need to come in late. I find it easy to go into the system and override it. We upgraded a few years ago, and we found P&Q very helpful. They are happy to talk me through any problems I may come across.”
(Jenny Hawkins of MBM Produce:) 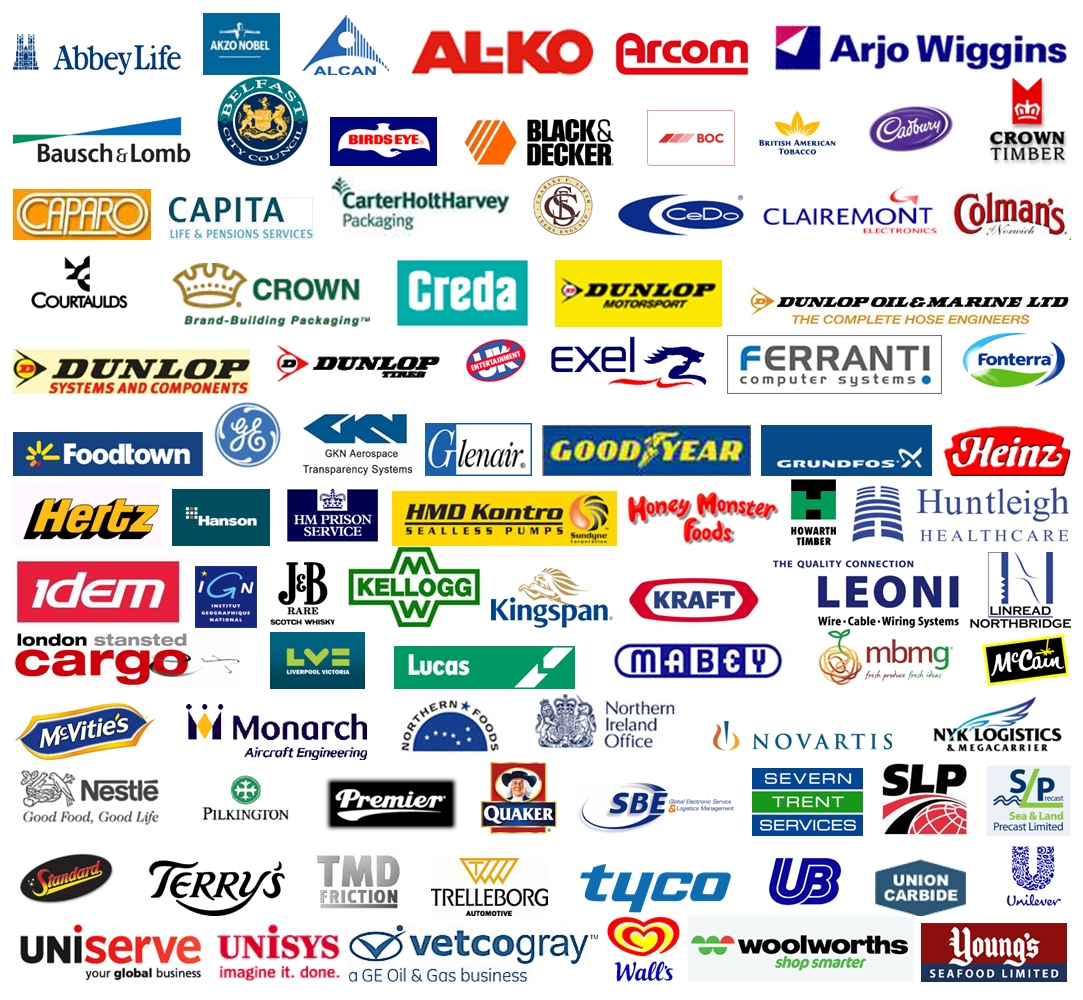 Monarch Aircraft Engineering, like most UK companies of any size, has been affected by the recent big changes in the demands placed on employers and manufacturers. With the introduction of the European Working Time Directive and new guidelines allowing parents with young children to apply for flexible working hours, the job of keeping track of payroll hours has never been more complicated.

Imagine implementing these new rules across a workforce which combines white- and blue-collar workers, some salaried, some hourly-paid. Throw into the mix seasonal fluctuations in demand, round-the-clock working schedules, the occasional use of contractor services and you are looking at a logistical labyrinth.

Monarch Aircraft Engineering is one company that has all of the above matters to contend with and it has found itself with an organically-developed solution. Back in the early '90s, Monarch's sister company, Monarch Airlines Limited was providing payroll services, at a price. It was decided that better and more cost-effective control could be exercised if Monarch Aircraft Engineering undertook its own payroll functions. At the same time it was decided to replace the existing manual clocking and paper-based calculation system with an electronic time and attendance system.

Pat Thomas, who had recently assumed responsibility for the payroll department began to consider new solutions to maximise effectiveness and minimise error. “I looked at the different software options that were available, and selected one created by P&Q International, called QTAR. It looked flexible enough to handle all our needs. In fact, it had some features like flexitime, access control and annualised hours which we didn't implement,” said Mrs Thomas.

“Transferring the company records was a mammoth job. I remember we bought the software just before New Year, 1992, and spent the next few months transferring information. In the spring, we ran a trial with the workshops section, using both electronic and paper systems, to find out how accurate QTAR was. We were expecting to have to run parallel systems for quite a while but, in fact, after a few weeks of testing we were so pleased with the program's functionality we swapped straight over.”

Adrian Jones, financial director, said in relation to the launch of the new system: “There was no problem introducing the technology at all. A clock is a clock to the workforce.” QTAR served its purpose, providing a degree of efficiency and accuracy that satisfied both workforce and management; payroll turnaround became faster and more cost-effective.

In 2000, Monarch Aircraft Engineering decided to re-evaluate the many electronic systems it used in the day-to-day operation of its business. Management had decided that it might be more efficient to implement a single broad solution which would handle time and attendance, job tracking, stock management and so on.

The board of directors then considered the company's options, including returning to P&Q, who had recently released a new version of QTAR. “Of course, in 2000 there were a lot more time and attendance solutions on the market. But the board had no reservations in returning to QTAR. It had always proved reliable and stable before. P&Q International has always been helpful and informative as far as support is concerned. It seemed the best choice.”

Richard Mintern, Monarch Aircraft Engineering's IT director, said: “As for the future, we are planning to roll out the system across our line station environment. Our maintenance crews work some complex shifts, and it will simplify things for us to have them on the same system as the rest of the workforce.

“There are some elements of modules in the program which we have not yet set up, but in time we are planning to do this,” Mintern added.

Recent developments in workplace legislation have required that new plug-in modules be developed to comply with the European Working Time Directive, which introduced a maximum 48-hour working week. The formula for calculating worked hours against the directive is complicated, usually being spread over a 17 working-week reference period, with adjustments to take account of each individual's holidays and sickness during the period.

Donald Gardiner, managing director of P&Q, said: “As soon as the new legislation was mooted, we developed a couple of modules. One allows retrospective reporting, to demonstrate compliance with the new regulations, the other predicts potential problems so that they can be avoided, either by restricting overtime worked by particular employees or by asking them if they wish to opt out of the directive. In addition, there are many different interpretations of how exactly the regulations should be implemented. Our system is designed to cater for that.”

For a business such as Monarch Aircraft Engineering, which has natural seasonal fluctuations where more overtime is worked at certain times of the year, an accurate monitoring system is absolutely essential to ensure the workforce is compliant with the new regulations.

Companies are required to keep records of employees' working times for two years. They may be requested to produce these records at any time – and if they do not, the regulations allow for prosecution. An electronic solution that meets these requirements is a bonus for a prospering business.

Any time and attendance software implemented these days must not only act as a payroll tool, but also feed information to the human resources section of the company. If an employee who has not willingly signed an opt-out agreement is approaching the point where the permitted number of hours has been worked, then management needs to be alerted.

Produced with the kind co-operation of:

First published in “The Manufacturer”, November 2003. 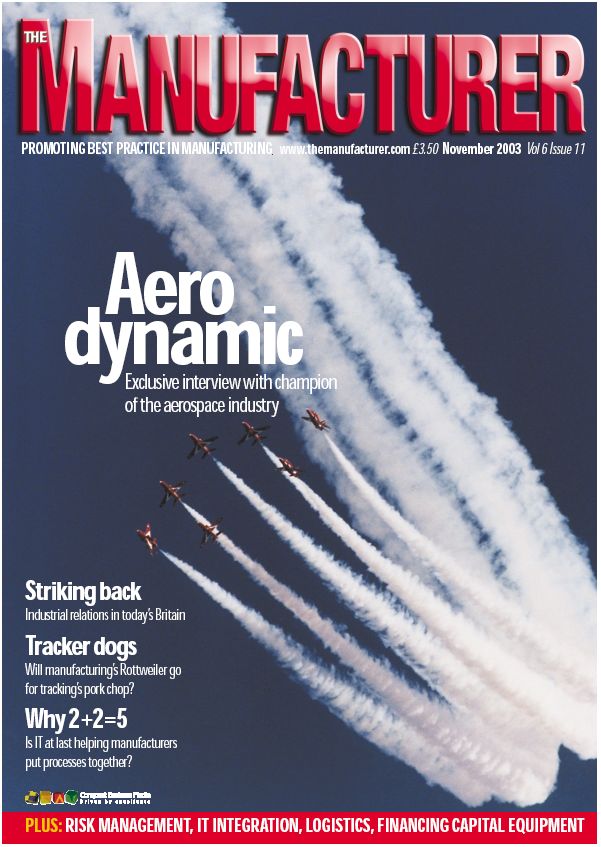 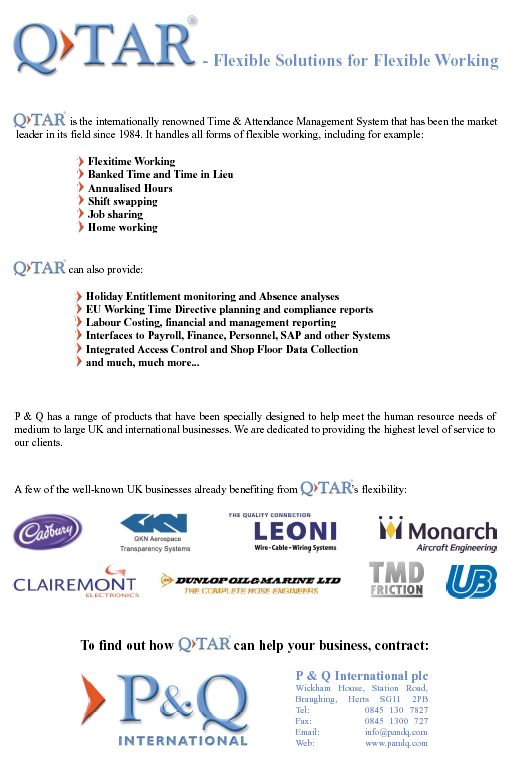 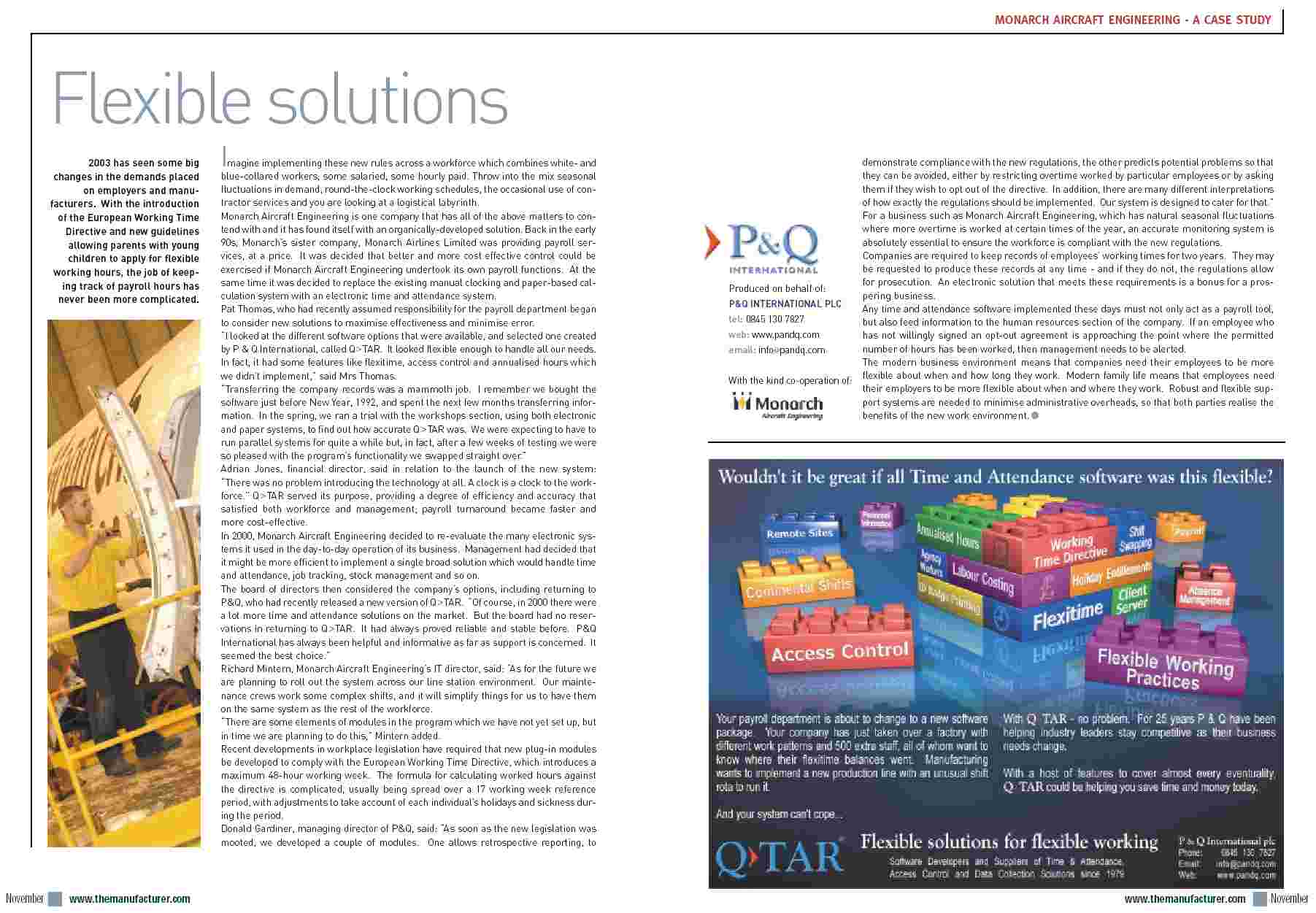